The centre has attracted widespread interest and support from the local and wider community, and has become the major driving force in the development of Irish language and indigenous arts services on the island. Alongside a year-round programme of arts activity and performances, the organization has delivered several large-scale festivals over the past five years, and continues to produce a challenging and diverse programme to cater for all ages and communities.

An Gaeláras was established in 1984 as Craobh Cholm Cille, a branch of Conradh na Gaeilge in the Bogside area of Derry. It is a company limited by guarantee and also has charitable status.

When Craobh Cholm Cille first started out in Dove House in the heart of the Bogside, the ambition was to provide Irish language classes for adult learners and for the young people of the area. However the demand for Irish classes was so great that it quickly outgrew its first premises.

To cater for learners from all over the city, and to be as inclusive as possible, it was decided to acquire city centre premises.

In 2001, An Gaeláras purchased McDaid’s bakery at 37 Great James Street, and secured planning permission for a new purpose built Irish Language, Arts and Cultural Enterprise Centre on the site at a cost of £4.6m. Construction of the O’Donnell & Tuomey designed building started in January 2008 and it was officially opened on 4th September 2009. In July 2008, the building represented Ireland at the Venice Biennale and has won many awards since its completion, coming second in the prestigious Stirling Prize competition, the first building from the North of Ireland to be nominated.

The facilities in the new Cultúrlann include a theatre and performance space, a cafe, teaching and training classrooms, business incubation suites and office space.

Cultúrlann Uí Chanáin also provided space for established related businesses and groups such as Dearcán (Irish language TV production company), Ciste Infhestíochta Ghaeilge, Comhaltas Ceoltóiri Éireann, and Cumann na bPíobairí, which are still in operation today and which have created a vibrant Irish cultural and arts based economy in the North West of Ireland. This continuing transformation of An Gaeláras’ Cultural Quarter to an Irish cultural and arts centre of excellence has placed a significant responsibility on the board of management and staff of An Gaeláras Ltd to match this pace of transformation in its delivery of community arts and education services.

The new building is a space for learning, creativity, exploration and enterprise and a beacon for the Irish speakers throughout the island of Ireland. The group currently draws the majority of its 126,000 annual users from the North West area, however there are an increasing number of users from outside this natural catchment and An Gaeláras views these markets as those with the most growth potential.

The overall project entails the management of 22 schemes, 36 staff and volunteers and the running of 4 buildings. The staff complement has grown from 2 full- time staff in 1998 to 20 full-time staff, 6 part-time staff and up to ten volunteers or placements at any given time.

The CEO and staff were central to the organising and delivery of the Fleadh Cheoil na hÉireann in August 2013 and to the Pan-Celtic Festival in April 2014 and the profile, status and stakeholder relationships that they have developed as a result of this are significant and will contribute to the future development plans of the organisation.

An Gaeláras Ltd has grown at a significant pace since it was first established and since the completion of their new premises, Cultúrlann Uí Chanáin. The delivery of festivals, arts and education programmes has expanded beyond the confines of the current space and we have recently acquired the adjacent Church and Manse buildings to provide extra capacity.

Cultúrlann Uí Chanáin was named after long-time Irish language activist Seán O Canáinn. It was officially opened by Eamon O Cuív, Minister for Arts, Heritage and the Gaeltacht on the 4th September 2009 with an enhanced programme of classes, courses, events and facilities. Within 12 months the organisation had outgrown this space and set about acquiring extra facilities.

The refurbishment and development of the Presbyterian Church and Manse at 33a-35 Great James Street, as an Acadamh Ceoil Thraidisiúnta and an Arts and Performance space, at a cost of £1.2m, to be completed in 2015. 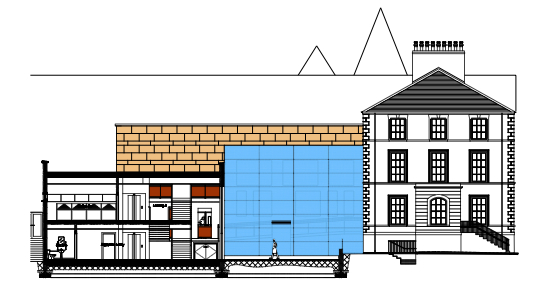 Since the opening of Cultúrlann Ui Chanáin in 2009 there has been a huge increase in the demand for Irish language classes. There has been a similar increase in traditional music classes. A lack of space and the high demand means that the number of classes is restricted.

Following the success of Fleadh Cheoil na hÉireann 2013, there has been an even greater demand leading to the proposal that an Academy of Traditional Irish Music be established as a legacy to the Fleadh. This will enhance the availability of music, song and dance classes.

The Academy will have the following aims:

In February 2016 Cultúrlann Uí Chanáin launches a new festival of Irish music with the following aims and objectives:

The development of the groups former premises at 34 Great James Street, as an Irish-language hotel, with 12 en- suite double rooms.

The purchase and development of another premises at Great James Street, Halla na nGael, in partnership with University of Ulster Magee, for Irish-speaking student accommodation.

The creation of a Gaeltacht Quarter in Bogside, Brandywell and Creggan. Work has begun on a comprehensive survey of the Gaeltacht Quarter to assess the demand and requirements of the area and to encourage active participation among the area’s residents. Work continues with local businesses to promote the use of bilingual signage in the Quarter, and with the Gaelscoileanna throughout the city to foster a sense of pride among the children.